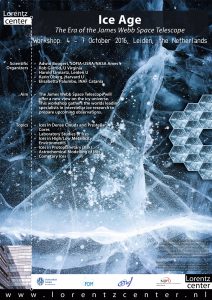 The James Webb Space Telescope (JWST) will be the premier observatory of the next decade, effectively the new “Hubble”, serving thousands of astronomers worldwide. A collaboration between NASA and the European Space Agency, the JWST has a 6.5-meter primary mirror and is scheduled for launch on an Ariane 5 rocket in October, 2018. It will have major impact on a wide range of fundamental science questions, ranging from the first luminous glows after the Big Bang, to the formation of solar systems and the sources of organic molecules and water that support the origin of life on planets like Earth.

Planning for observations with the JWST is already making great strides. Exploring the conditions and resources that lead to the origins of life is a research field in which members of RPI’s New York Center for Astrobiology have particular experience and expertise. Doug Whittet recently attended a workshop “Ice Age – The Era of the James Webb Space Telescope”, presenting an invited review on the current status and future directions of observations of interstellar ices. This workshop, hosted by the Lorentz Center at the University of Leiden in the Netherlands (October 4-7, 2016), was attended by 50 researchers specializing in this area of research. New teams were formed that will develop detailed observing programs aimed at elucidating the physical and chemical processes that provided the raw materials for life on our planet and other habitable worlds.